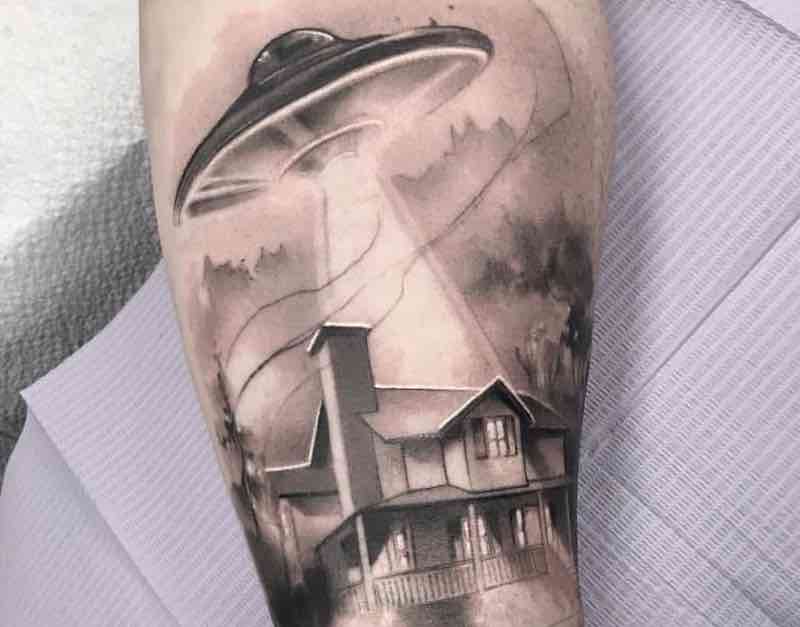 The term UFO, an “unidentified flying object” started out in the 1950s by the US airforce and was originally used to refer to any flying object with features or flying maneuvers that cannot be positively identified. Before the acronym UFO was coined, the term used was either flying saucer or flying disc.
While the term was meant for any unknown airborne object it has become a term synonymous with extraterrestrial spacecraft, for most just hearing the word UFO will immediately bring up pictures of alien spaceships in their head.

UFOs to many are mysterious and fascinating, and a large number of people believe to have seen a UFO for themselves, while some won’t believe them they have found like-minded believers and other UFO witness’ online that now have several communities that will camp out at past sightings to await the UFO’s return.

The most popular UFO tattoo design is of a flying saucer beaming up someone or something to the spaceship, even when done in different styles these designs can have a classic or traditional tattoo feel to them.
One big element of a UFO tattoo that can completely change the dynamic and mood of the design is the background, with most sightings being out in nature where the background is usually mountains, forests, and deserts but there are endless possible settings for a UFO tattoo depending on the desired aesthetics or meaning behind the tattoo.