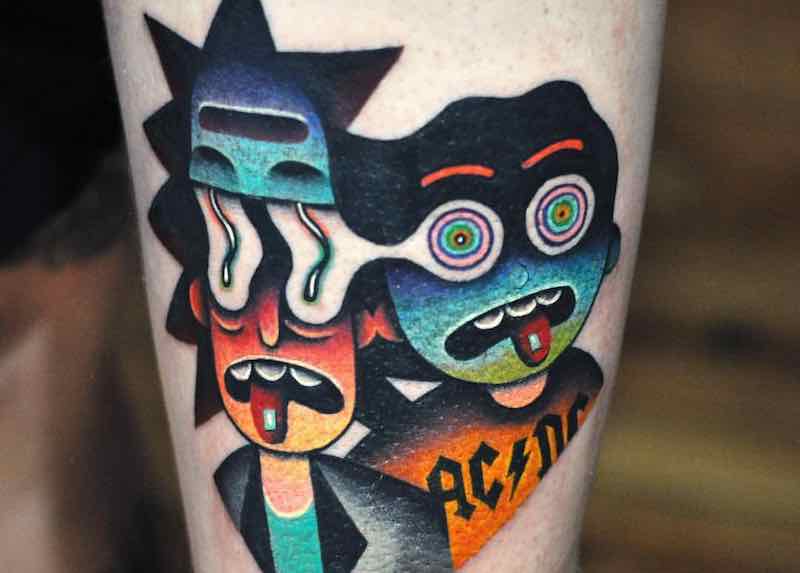 Created by Justin Roiland and Dan Harmon Rick and Morty is a cartoon first released in 2013 that began as a short animated film in a short film festival co-founded by Dan Harmon and eventually picked up as a full series by cartoon networks adult swim, the show has since gone on to cult status and for good reason, the concepts, themes, dialogue and way it is all presented is unlike any other animated or live-action show that’s been made.

The show has been praised by critiques for being clever, original and having great artwork to match.
the originality in the show can also be seen in Rick and Morty tattoos, like with artist Roy Rowlett tattooing a green screen background to a Rick and Morty tattoo, taking it to a whole new level.

Many of the Rick and Morty tattoos being done are not just your average fan art tattoo but high quality work being done by some of the worlds best tattoo artists that take the shows characters and truely make it their own design but adding their own and feel which results in a very unique tattoo.

The most popular Rick and Morty tattoo to get is by far Pickle Rick, the moment after the show entitled “Pickle Rick” aired the internet made it clear that the character was a huge fan favorite and many have gone on to show their dedication to the pickle by getting it tattooed.