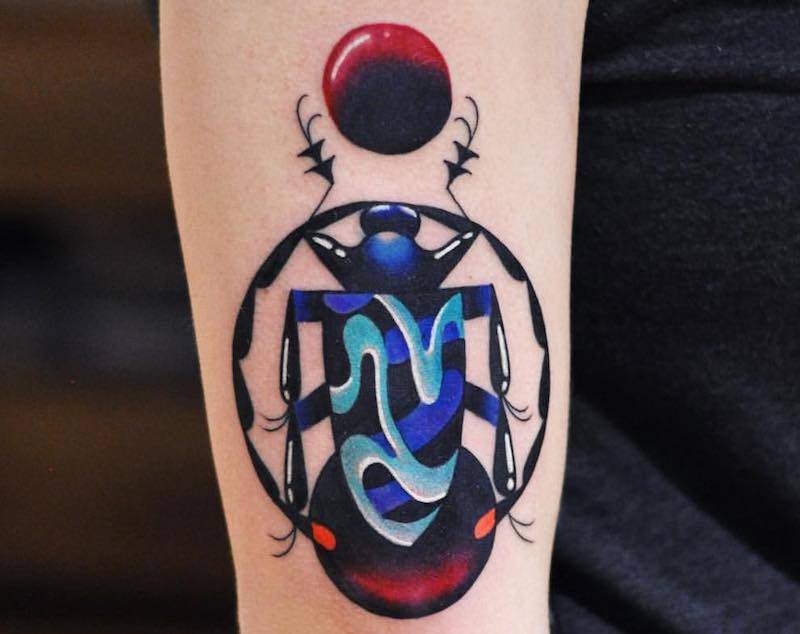 Although beetle tattoos have been around for quite some time the quality, imagination and vibrant colors used has changed and improved with modern tattooing techniques and equipment.

There are some truly amazing beetle tattoos being done from some of the top artists around the world and its no wonder why this insect is such a popular tattoo design choice, its symmetry, and natural patterns make it one of the more ascetically pleasing insects to get tattooed.

Scarab beetles played a big part in ancient Egypt, depictions of these could be seen everywhere from sculptures, jewelry, writing, amulets, and art.

The god of the rising sun Khepri was represented as a Scarab beetle because it rolls large balls of dung across the ground similar to the morning sun.

Scarab beetle tattoos are the most popular beetle tattoos to get. With a rich history and ascetics behind them easy to see why these are such a popular tattoo design choice.

Some beetles are capable of lifting 600 times its own weight making strength and power a part of the symbolism behind beetle tattoos.

Transformation and change from the beetle going through many physical stages growing up, this also can come to mean rebirth.

Colors used in a beetle tattoo design can be used to convey a particular meaning so there can be a huge variety of different meanings.